The photo appeared in newspapers and magazines around the world. It was a horrible picture that seemed to encapsulate the horrific tragedy that was the Vietnam War. It was taken the first week in June 1972. I had just finished my sophomore year in high school. The following week the Watergate break-in would occur.

The picture, as you probably know, was of a nine-year-old girl running naked and in terror from her village in South Vietnam. It had just been subject to an American napalm air attack. The burning napalm had gotten on this little girl, and she was screaming in pain.

This week is the fiftieth anniversary of that event. The girl in the photo, Kim Phuc Phan Thi, now a mature woman living in Ontario, tells her story in The New York Times: It’s Been 50 Years. I Am Not ‘Napalm Girl’ Anymore. The photo was taken by a Vietnamese cameraman, Nick Ut, working for the Associated Press, and it earned him a Pulitzer Prize. About him and her experience, Ms. Phan Thi writes:

Nick changed my life forever with that remarkable photograph. But he also saved my life. After he took the photo, he put his camera down, wrapped me in a blanket and whisked me off to get medical attention. I am forever thankful.

Yet I also remember hating him at times. I grew up detesting that photo. I thought to myself, “I am a little girl. I am naked. Why did he take that picture? Why didn’t my parents protect me? Why did he print that photo? Why was I the only kid naked while my brothers and cousins in the photo had their clothes on?” I felt ugly and ashamed.

Growing up, I sometimes wished to disappear not only because of my injuries — the burns scarred a third of my body and caused intense, chronic pain — but also because of the shame and embarrassment of my disfigurement. I tried to hide my scars under my clothes. I had horrific anxiety and depression. Children in school recoiled from me. I was a figure of pity to neighbors and, to some extent, my parents. As I got older, I feared that no one would ever love me.

Because of the photo, as a young adult after the war Phan Thi became an unwitting celebrity. She was repeatedly interviewed by the press and political leaders,

… all of whom expected to find some meaning in that image and my experience. The child running down the street became a symbol of the horrors of war. The real person looked on from the shadows, fearful that I would somehow be exposed as a damaged person.

Being a “symbol” is not a life, however, and that is what Phan Thi needed and wanted. Thus, she began a journey of healing, discovery, and purpose.

It was only in adulthood, after defecting to Canada, that I began to find peace and realize my mission in life, with the help of my faith, husband and friends. I helped establish a foundation and began traveling to war-torn countries to provide medical and psychological assistance to children victimized by war, offering, I hope, a sense of possibilities.

Everyone needs “a sense of possibilities” and that awareness is what saved Phan Thi. She came to realize that who she was not defined by her past. Her value as a person was not limited by her scars. And rather than run away from her past trauma, she came to terms with it and even embraced it, transforming it from a weakness into a strength.

This is the meaning of Christianity’s central symbol, the cross. “Look at my hands and my feet,” the crucified and risen Jesus says to the disciples. His wounds weren’t to be hidden in embarrassed self-consciousness. Paul declares, “We preach Jesus Christ and him crucified.” Life is trauma and woundedness these stories say.

Yet they are never the end of the story. Scars are signs of healing, new life, and new possibilities. As Phan Thi discovered, wounds and scars do not define us. They are part of our story, our past, yet we live only in the Eternal Now. And now is always open, filled with potential and the possibility of new stories to be lived and shared. 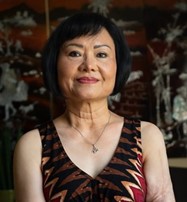 Kim Phuc Phan Thi says she barely remembers that terrible day a half-century ago. Yet it lives in her now as a mission of peace and compassion. She is a living witness to victims of violence as she was that the future is always open, even if it isn’t a future we wanted or imagined. If we can be open to our heart and the Spirit within us, we can discover new life is always waiting for us.

I’m proud that, in time, I have become a symbol of peace. It took me a long time to embrace that as a person. I can say, 50 years later, that I’m glad Nick captured that moment, even with all the difficulties that image created for me. That picture will always serve as a reminder of the unspeakable evil of which humanity is capable. Still, I believe that peace, love, hope and forgiveness will always be more powerful than any kind of weapon.