Last weekend I visited Bandelier National Monument. It’s located about an hour northwest of Santa Fe and twenty minutes south of Los Alamos. It encompasses about fifty square miles of cliffs and valleys, which were home for many centuries to pre-Columbian native peoples. From the visitor center, you can follow a path through the remains of a large pueblo and various cliff side structures and caves. 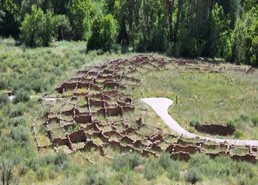 The valley was abandoned in the 1500s, shortly before the arrival of the Spanish. Throughout the Southwest one can find remains of pre-Columbian settlements of native peoples, which all thrived for a time and then were abandoned. Why? We’ll probably never know with certainty but drought, a frequent occurrence in this arid region, is the likely cause or significant factor in most cases. Hunger and disease reduced the population and the remainder migrated to reestablish themselves elsewhere, or were absorbed into other communities.

It is a mysterious and even eerie feeling to walk through these ruins, imagining how they once were. What remains now are essentially the foundations for what would have been multi-story structures. The park has signs depicting how they once looked and the activities within them. The found pottery shards, tools and arrow heads, the petroglyphs, and the smoke-blackened cave ceilings make it clear this is no reconstruction or Disney park. Real people lived real lives here. Today, residents of the nearby pueblos include their descendants.

In a recent essay, The Final Collapse, Pulitzer winning journalist Chris Hedges writes of his visit to Cahokia Mounds in south-western Illinois, across the Mississippi from St. Louis. At its height c. 1100 CE, Cahokia was the largest urban center north of Mexico, with a population as high as 40,000. If accurate, it would have been larger than either London or Paris at that time.

By 1350, however, Cahokia had largely been abandoned. Again, the question is: Why? Here, as Hedges says, the story is a darker one. Environmental factors were likely a major factor but, unlike in the Southwest, they may have been primarily human caused. Natural flooding likely combined with overhunting, deforestation, pollution, and disease to make the city uninhabitable.

Hedges also says that excavations of residences, ceremonial sites, meeting halls, and tombs point to an increasingly stratified, hierarchical society. In short, it seems that as time went on, the rich got richer and more powerful, while the poor got poorer and more oppressed—an old and familiar story. There is also evidence of increasing violence and of the elites withdrawing into walled enclosures for security. In the end, however, it all collapsed.

Christ Hedges is an iconoclastic journalist and essentially persona non grata now in mainstream media. He can thunder like an Old Testament prophet, a role he comes by honestly as he is also an ordained Presbyterian minister. For Hedges, Cahokia is a clear warning of the dangers lying ahead for a Western civilization teetering on the edge of disaster. He turns to anthropologist Ronald Wright for a succinct but bracing judgement.

“Each time history repeats itself, the price goes up,” the anthropologist Ronald Wright warns, calling industrial society “a suicide machine.” In A Short History of Progress, he writes:

“Civilization is an experiment, a very recent way of life in the human career, and it has a habit of walking into what I am calling progress traps. A small village on good land beside a river is a good idea; but when the village grows into a city and paves over the good land, it becomes a bad idea. While prevention might have been easy, a cure may be impossible: a city isn’t easily moved. This human inability to foresee — or to watch out for — long-range consequences may be inherent to our kind, shaped by the millions of years when we lived from hand to mouth by hunting and gathering. It may also be little more than a mix of inertia, greed, and foolishness encouraged by the shape of the social pyramid. The concentration of power at the top of large-scale societies gives the elite a vested interest in the status quo; they continue to prosper in darkening times long after the environment and general populace begin to suffer.”

The park I visited is named for Adolph Bandelier (1840-1914), a Swiss-born anthropologist who was the first to excavate that site and others in the region. While Bandelier uncovered the types of artifacts I listed above, Ronald Wright says future archaeologists will find far different remnants of our world.

The archaeologists who dig us up will need to wear hazmat suits. Humankind will leave a telltale layer in the fossil record composed of everything we produce, from mounds of chicken bones, wet-wipes, tires, mattresses and other household waste to metals, concrete, plastics, industrial chemicals, and the nuclear residue of power plants and weaponry. We are cheating our children, handing them tawdry luxuries and addictive gadgets while we take away what’s left of the wealth, wonder and possibility of the pristine Earth.

When I am enjoying the beauty of this unique land, a combination of rugged desert and forested mountains, I can’t also avoid feelings of grief at the prospect of its loss. Just a few months ago and only fifty miles from where I am now, the largest forest fire in state history consumed over 500 square miles of the east slope of the Rocky Mountains. Another fire to the south was nearly as destructive, together scorching an area the size of Rhode Island. The frequent sight of dead and dying piñon pines is a reminder that any place here could be next.

It’s hard to listen to voices like those of Hedges or Wright. Yet spend some time reading the Old Testament prophets and you will hear voices at least as angry and damning. Within that anger, however, is sincere compassion. The predictions are not so much of God’s judgment but of the consequences of the foolishness and greed of Israel’s leaders—the ancient world’s 1%. Return to following God’s ways of justice and faithfulness, they say, for there is still hope for renewal and new life.

Yet even now, says the Lord, return to me with all your heart…, rend your hearts and not your clothing. Return to the Lord your God, for he is gracious and merciful, slow to anger, abounding in steadfast love. (Joel 2)