Brennan Gilmore is a talented and busy man. Forty-three years old, Gilmore was in the US Foreign Service for 15 years, and now lives near Charlottesville, VA. He has been involved in multiple political campaigns and organizations, and works in rural workforce development, bringing IT opportunities to underserved communities in rural Virginia. He is an adjunct faculty member at James Madison University. Gilmore is also a multi-instrument musician, playing guitar, mandolin, banjo, and violin, and often providing lead vocals for groups performing folk, country, blues, reggae, world, and rock music.

With such a resume, you might not be surprised that a recent accomplishment of Gilmore became an internet sensation, generating a feature in Newsweek magazine. What is surprising is that it didn’t involve any of the activities listed above. Gilmore is also an amateur astrophotographer and his latest achievement is a picture of our nearest galactic neighbor, Andromeda, a spiral galaxy similar to our Milky Way, though much larger.

Andromeda is visible to the naked eye as a faint smudge. But as I said in my sermon on Sunday, it’s drawing closer for Andromeda and the Milky Way are on course for a celestial collision. It won’t be for a few billion years, however, so not to worry. 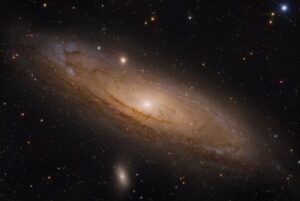 Humans have been fascinated by the night sky as far back as we know. The imaginations of ancient people overflowed trying to understand the incredible scene above their heads. What is all this, and what does it mean? However different their ideas, all people knew it revealed a great mystery of reality and of their own existence.

It was only a hundred years ago that Edmund Hubble proved that Andromeda was a separate galaxy. Suddenly, the Milky Way no longer was the universe but just one part of it—a part that has been growing steadily smaller, especially due to the space telescope bearing Hubble’s name. 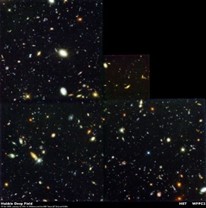 The landmark Hubble Deep Field photo I showed Sunday has come to symbolize that reality. It encompasses a tiny portion of the sky, the size of a dime held at arm’s length. Yet he original 1995 image shown here (several others have been made since), revealed approximately 1,500 galaxies. Today, scientists estimate the number of galaxies in the universe to be as high as 2 trillion.

Andromeda galaxy has about a trillion stars, while our more typical Milky Way has only about a third that many. The number of stars in the universe is almost beyond meaningful calculation. One estimate is 200 billion trillion. For comparison, the human body has about 30 trillion cells. Carl Sagan famously said there are more stars in the universe than grains of sand on earth.

As I said on Sunday, our scientific understanding of the universe has swept away the ancient three-tiered universe found in the Bible. This has been disturbing for many people. Some, like the fundamentalists, have sternly and blindly rejected the science. Others, common in mainline Christian denominations, incoherently try to accept modern astronomy yet retain the ancient understanding of God, holding each in separate and isolated compartments.

Given those religious options, it’s not surprising that many others have concluded that if the universe is as science says, and God is as religion says, then there is no place for God. And while probably few would specifically name “astronomy” as their reason for leaving or not participating in religion today, for many there is nonetheless the sense that traditional religion’s God simply doesn’t fit the complex, multi-dimensional world they live in.

And they’re right, if the God they’re thinking of is the one trapped in the ancient, pre-modern world of 2,000 years ago. Science is our world view now, and no one sincerely believes that is going to change, not even the disingenuous fundamentalists. But what is to keep our “God view” from changing, except our own stubbornness? Isn’t that exactly what needs to happen?

Taking up that challenge, seventy years ago J. B. Philips wrote Your God Is Too Small. It became an international bestseller and remains popular today. Unfortunately, churches weren’t paying attention to him nor have they to the numerous other writers, teachers and theologians who have argued this case. Yet Philips had it exactly right in his title: the God of the ancient Near East is much too small for the world and for life today. That God was right for people then, but not now.

Religion’s mistake is to think it can figure God out and then lock that God in its box of scripture, doctrine and belief. But history shows that God has an irritating habit of continually popping up outside religion’s boxes. Christianity should know better for that is exactly what it says Jesus was about. But then it drew a line at 30 AD and said that God is now done with outside the box popping. Heavenly hilarity ensued.

Astronomy’s discoveries don’t diminish God but only contribute to the awe and wonder that has always been humanity’s primary response to existence and to its source, “the ground of being” as the medieval theologian Meister Eckhart described God. What else and who else could God be? How does a God on a throne in the heavens even fit with Paul’s declaration in Acts, that God “is the one in whom we love and move and have our being”?

Gilmore has been stunned by the flood of Internet responses his image generated. “I think there’s an innate sense of connection to the cosmic reflected in people’s response—after all the atoms in our bodies, food, smartphones, come from the stars.” Some chord was obviously struck, and one comment I read may have summed up many of them: “This is the content I need in my life.”

So much of modern culture diminishes life and the world, alternating between banality and triviality on the one hand and intense conflict and destruction on the other. And whatever diminishes the world diminishes God. Genuinely seeing the stars in the distance or the world right in front of us is indeed “content” we all need, to lift ourselves up and to appreciate the wonder of creation, of our place within it, and the Creator who makes it all so.