By Gloria DeiJanuary 28, 2021No Comments

In his Daily Mediations this week, Matthew Fox shared this image of an early Renaissance tapestry c. 1410. It depicts the visitation of Mary to Elizabeth, an Advent story we heard a few weeks ago. The significance of the meeting is delightfully conveyed by the presence of two tiny figures on the women’s tummies, who are Jesus and John in utero. 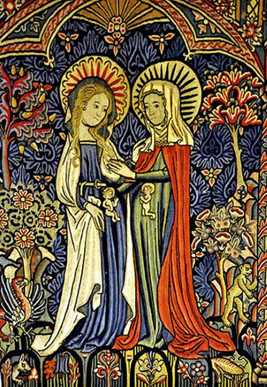 I smiled when I saw this, not only because of the picture but because it represents so well the beginning of the historic progression of modern Western art which I mentioned last week. For with modern art has also come modern culture and modern spirituality.

While still rather medieval in its flatness and other worldliness (what’s with that canopy over their heads?), the image nonetheless conveys a new aliveness. Mary and Elizabeth are taking on individual personalities. And while the is no real “setting”, nonetheless the curious plants and animals do get our attention. In the past, Mary and Elizabeth would have been floating before a plain blue or gold background with little else.

Fast forward to the next century, imagining such a picture in the High Renaissance, and all these trends have accelerated. Mary and Elizabeth are now very realistic, and we can easily imagine them as actual persons (and they may be based on models used by the artist}. There is also a lifelike setting, with other people, buildings, landscape, etc. Mary and Elizabeth are still in the center, but our attention is also drawn to what else is going on in the picture. (Doesn’t that guy on the left look like the archduke?)

Now let’s take our picture into the 17th century and the transition from the Renaissance to Modernism. Wait. Where are Mary and Elizabeth? Oh, there they are, but we had to search for them. Their figures are smaller, and they aren’t in the center but off to one side. In fact, they are starting to seem like an afterthought because there is so much else going on in the picture. They represent one story being told but there are others just as interesting. (What are those people talking about? And what’s going on over behind that tree?) And there is the lush and fascinating setting itself. For this work is less religious art and more landscape or cityscape.

When we move into the 1700s and the Enlightenment there’s one big change from where we started. Mary and Elizabeth have disappeared altogether. Instead, we have (perhaps) two pretty, young women having a picnic, or gliding in a boat on a river. The scene is quite lovely. (Have I been there?) Who are these women? Friends? Sisters? We don’t know. With Mary and Elizabeth, seeing them together evoked their story in the viewer’s mind. Here there is no preset story, and the viewer is invited to create their own story, perhaps with themselves in it. (How I wish I could be them!)

We can carry this further in one direction Modern art went. In the late 19th century the women have disappeared and now it’s just a field or a river or, in the case of Claude Monet, haystacks. Lots of haystacks, in every season and every time of day. They aren’t very realistic but “impressionistic,” yet you know what they are. But what’s most significant is that somehow, with his skill and technique, Monet has taken these mundane objects and celebrated them. And thousands of artists did the same with countless other natural objects and events of human life. 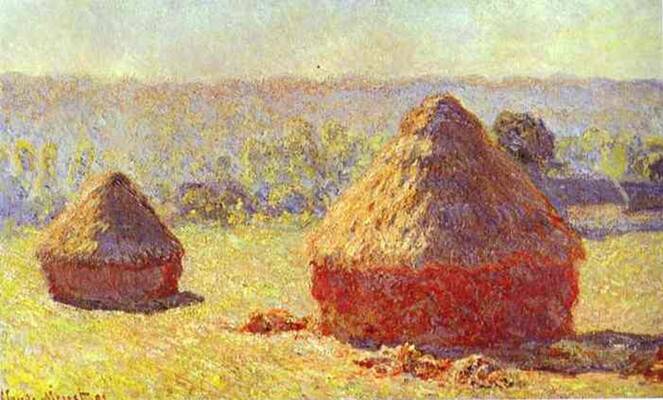 Still to this day, there are those in the church who lament that art “got away from it.” Art is now secular, not religious, they say. And frankly most religious art after the Renaissance is kitschy or just bad (the Baroque angels looking like overfed babies are some of my favorites). But just who left who is debatable.

For what artists were discovering and expressing in this time was that the world around us and our ordinary lives were glorious things in themselves. That they were, in fact, sacred. You don’t need to tell an explicitly religious story with your work, artists were learning, but use your skill to portray some aspect of the world in a revealing way and the depths of reality will open.

A still life is a fascinating example. A well-executed painting of a simple pitcher, a bunch of cut flowers, and a few pieces of fruit can transfix us. What’s going on? Something inside us is being touched. Somehow, we are connecting with this picture and with the world it portrays. Our isolated selfhood is transcended so that we realize we are part of something more than ourselves. We feel in a new way that we belong to this world, and that that’s a good thing.

Artists largely abandoned religious images and ideas because the church wouldn’t let go and share them (that control thing, again), but it’s the church that has been poorer for it. Medieval cathedrals are amazing things, yet people say that it’s when you stand at the edge of the Grand Canyon that no one—at least at that moment—can be an atheist.

Artists know that and, in their own ways, have been trying to show us how amazing and God-filled this world is. That’s more radical and, to some, provocative than we often realize. For it elevates this world, and every life in it, to a new and higher plane. Which means that it isn’t just certain people or in certain places, but any of us, in any place, at any time may, like Moses, hear a voice say, “Take off your shoes for you are on holy ground.”

Blessings in your life and ministry. Pastor Doug