By Gloria DeiFebruary 4, 2021No Comments

On an early spring night in 2005, a woman looked out her car window at the decrepit wall of a Chicago expressway viaduct. Amidst its cracks and grime, she saw what seemed to her to be an image of the Virgin Mary. City officials later said it was mostly salt leaching out through a crack. Nonetheless, it quickly became known as “Our Lady of the Underpass.” 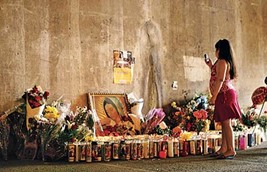 The woman who discovered the image told her family and friends and soon thousands of people were coming to see it, some out of curiosity, but many came to see what they believed was a miraculous appearance. I drove by the spot by chance a couple years later when the image had nearly faded away. There were still candles and flowers at its base.

The appeal to some of appearances and visions is understandable and there is no need to disparage them. Most modern people, however, find them of little value. What is truly unfortunate today, however, is that so many miss the mystery and sacredness of the world around them just as it is. This, too, is a mystical vision, and one most of us knew but then forgot or were told to dismiss.

I don’t know of anyone who didn’t lay on their backs as kids and watch the clouds. Yes, it was fun to look for images of horses, rabbits, dragons, etc. and point them out to our playmates. But there was also something mesmerizing about the clouds as clouds. Not their meteorological nature (which we didn’t yet understand) but simply their shapes, texture, colors, and movements. We were touched, deeply perhaps, simply by their being, their awesomeness, their “realness.” 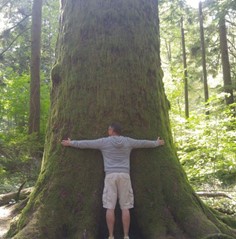 A few years ago I visited my son who lives near Seattle. One day while hiking in a lush state park at the foot of the Cascades, we came to a stand of enormous centuries-old trees, beneficiaries of the region’s unending rainfall. Of course, we took photos of ourselves next to these arboreal giants. But our humor was partly a way to deal with their massive presence. Standing by them, touching them, was almost overwhelming. Awe, amazement, wonder, humility, and joy were all rolled together in reaction to their simply being there, like the clouds by their “realness,” but unlike the clouds so in-our-face

Not long ago a diver wrote of having a similar experience encountering a large whale. Looking in its eye, and know he was being looked at with that eye, shook and unnerved him. And some of this is about scale since we like to think of ourselves dominating the natural world. Beholding the Grand Canyon (as I wrote last week), seeing a great mountain range, standing on an ocean shore, or looking up at a sky full of stars all put our lives in humbling perspective.

But size is only one kind of experience for awe and wonder are embodied everywhere if we have “eyes to see and ears to hear.” It can be as simple of looking—really looking—at the patterns in your granite countertop or the wood grain of your coffee table. Or looking at the intricacies of a flower in your garden, and then observing the bee that comes to explore it. Sitting on the beach and watching the birds move back and forth with the waves or plunging into the water for a catch. Or listening to a bird’s song or a hooting owl. And you don’t need a great whale—just look into the eyes of your dog or cat or even a nearby squirrel. 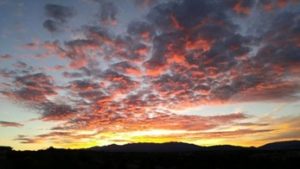 What’s going on? What am I getting at? Today we automatically want to analyze and “understand” what we encounter and put it into words. That’s NOT what I mean. In fact, words can’t fully express this experience, which is simply our awareness of being in and a part of the world. It bears with it our awareness of our essential connection with everything—we are a part of “all this” and all this is a part of us. Our egocentric independence cringes at such a notion yet that is a sign of our own unreality, our disconnection from reality, and our dilemma.

For in that experience and awareness is the discovery of the underlying sacredness of reality, the sacred presence within reality, of the “original goodness” of creation as it was declared to be in Genesis 1. We want “connection” with our creator but disconnection from the creation. Yet creator and creation can’t be separated. “Look at the stars,” Abraham is told. “Consider the lilies,” Jesus says. Behold Jesus’ broken, dying body and see the love of God, the gospels witness.

We don’t need to see faces on rocks or crosses in clouds but simply see—really see—the rocks and clouds themselves, and the creation that surrounds and upholds them and us. Our increasing alienation from our planetary home and our alienation from God are not unrelated. To be at home with God requires we be at home in and with God’s creation. To see God we must genuinely see the way God chose to come into being, beginning nearly 14 billion years ago. “Wake up,” all the great spiritual traditions tell us, and discover sacredness at your fingertips, and even within them.

Blessings in your life and ministry. Pastor Doug