Pope Francis is spending most of this week in Canada. For an aging pope for whom long distance travel is increasingly difficult, this commitment of time and energy is an indication of how seriously he views this trip. As you are probably aware, its primary purpose is for Pope Francis to issue a formal apology on behalf of the church for a century of abuse of indigenous students in church-run schools. From The New York Times:

Pope Francis offered a sweeping apology directly to Indigenous people on their land in Canada on Monday, fulfilling a critical demand of many of the survivors of church-run residential schools that became gruesome centers of abuse, forced assimilation, cultural devastation, and death for over a century. “I humbly beg forgiveness for the evil committed by so many Christians against the Indigenous peoples.….” Before his speech, Francis visited a cemetery where local Indigenous people believe children were buried in unmarked graves…. “I am sorry,” he continued. “I ask forgiveness, in particular, for the ways in which many members of the church and of religious communities cooperated, not least through their indifference, in projects of cultural destruction and forced assimilation promoted by the governments of that time, which culminated in the system of residential schools.”

Those last words both reveal and hide a central element of this story. Beginning in the 19th century, it became government policy of both the United States and Canada to “assimilate” Native peoples into the predominant Western culture. The most efficient way to do this, it was decided, was to raise Indigenous children in Western style schools. This necessitated children leaving or, in most cases, being taken from their families and placed in boarding schools, often hundreds of miles away.

These school were most often operated by churches, about two-thirds Catholic and a third Protestant. At the schools, all expression of Native culture was prohibited: language, clothing, hair style, and religion, including traditional song and dance. As is sadly no longer surprising, many of the schools also became the locus of physical and sexual abuse. Recently it has been discovered that in Canada thousands of children died at the schools. Most were buried in mass unmarked graves, some discovered with aerial x-ray photography. 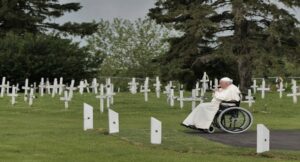 What the pope leaves unsaid is why it was that the church was such a willing participant in these atrocities. The truth is that the church (both Catholic and Protestant) has rarely respected or taken seriously the culture of Indigenous peoples anywhere they were encountered. As Christian missionaries fanned out across the globe, their inherent cultural and racial prejudices were combined with a strong sense of religious superiority. Native peoples were to be both converted to Christianity and transformed into European-like Westerners.

In the Western Hemisphere, the foundation of the abuse of Indigenous peoples and culture were the papal bulls establishing a so-called “doctrine of discovery.” These edicts gave European explorers the right to expropriate any lands not occupied by Christians. Thus, Indigenous peoples had no right to the land on which they lived. Astonishingly, this “doctrine” was recognized by the US Supreme Court in 1823 in Johnson v. McIntosh. Chief Justice John Marshall’s opinion in the unanimous decision affirmed “that the principle of discovery gave European nations an absolute right to New World lands.” Thus Indian “removal” was free to sweep across the continent.

The arrogance and injustice of all this is now widely recognized. How to respond is not so clear and the struggles of Native peoples around the world to protect themselves and their cultures continue. For the church, public apologies certainly are in order (Canadian Protestant churches have also apologized for their roles in the Indian school horrors).

But apologies are not enough. There also needs to be a recognition of why the centuries of abuses happened in the first place. Pope Francis acknowledged how this was all so contrary to the most basic standards of Christian decency and compassion. What he didn’t say was how Christians could so easily ignore those standards and yet believe they were honoring their faith.

The answer is the still prevalent belief in Christian superiority. In scripture, doctrine, creed, prayer, preaching, and liturgy there remains ample support for the notion that Christianity is “#1”. Baptism and belief in Jesus as Lord are still often touted as the only sure way to salvation. The theological principle that supported forcing Native children to abandon their own religion and traditions is still largely in place in theory, if not in practice.

Why not abandon such a notion once and for all? Why not finally acknowledge both the insights and truth found in the world’s religious traditions, and the limitations and fallibility of all religious belief? The religious exclusivism that was possible in the ancient world must be seen as both naïve and simply intolerable in a crowded world where people of different religions and no religion live side-by-side.

Scottish Canadian author and teacher, John Philip Newell, tells of giving a presentation on Celtic Christianity at a conference in Ottawa, Canada.

I referred especially to the prologue of John and his words concerning “the true light that enlightens everyone coming into the world.” I was inviting us to watch for that Light within ourselves, in the whole of our being, and to expect to glimpse that Light at the heart of one another and deep within the wisdom of other traditions. At the end of the talk, a Mohawk elder, who had been invited to comment on the common ground between Celtic spirituality and the native spirituality of his people, stood with tears in his eyes. He said, “As I have listened to these themes, I have been wondering where I would be today …  where my people would be today … and where we would be as a Western world today if the mission that came to us from Europe centuries ago had come expecting to find Light in us.”

Where indeed? As our Western dominated world spins out of control, we desperately need to be listening to other voices, to look to new sources for a guiding Light. We need to drop our exclusivist and dualistic notions that one side is right and all others wrong. As Christians, we know that everyone is created in God’s image and alive with the Spirit. Yes, we have Light to share but so does everyone else, whatever their religion or philosophy. Putting our share of the Light together will help guide us all to the life and world we seek.